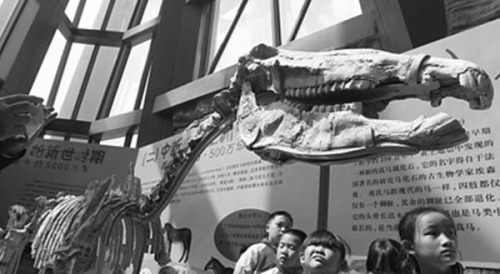 A large-scale public-welfare publicity event organized by the Liaoning Provincial Department of Land and Resources and the Shenyang Normal University, â€œTreasure of the Earth's Resources, 2014 Ma Foshi Special Exhibition,â€ was grandly exhibited at the Liaoning Ancient Biology Museum from April 20th to 26th.
This year is China's traditional Year of the Horse. The organizers specially planned this exhibition on the occasion of Earth Day. The exhibition focuses on the origin and evolution of horse fossils and horses in China and other countries, as well as the harmonious coexistence of horses and humans. It is of great significance to publicize and popularize knowledge of biological evolution and guide people to care for the earth and protect natural resources. Among the fossils exhibited are the complete skeleton fossils of the German original horse Maosuo and the three-toed horses found in China, the flat three-toed horse, the equestrian horse, and the wild horse of the Przewalski horse, Dalian horse, Zhongma horse, and Yunnan horse. The bones and replicas of fossils such as the Sanmen Horse and other fossils are the â€œfossil feastâ€ for the first time in China to bring together Chinese and foreign fossils.
Liaoning Paleontological Museum is the largest museum of paleontology in China so far, covering an area of â€‹â€‹19,000 square meters and a building area of â€‹â€‹15,000 square meters. The museum adheres to the position of â€œacademic-science popularizationâ€, with a focus on the â€œJuhe Biotaâ€ in Liaoning, â€œYanliao Biotaâ€, early angiosperms, ancient birds, ancient reptiles (including dinosaurs), and ancient humans in Liaoning. The four research areas have made great efforts to continuously obtain important scientific research results. In the past three years, nearly 500,000 visitors have been received.